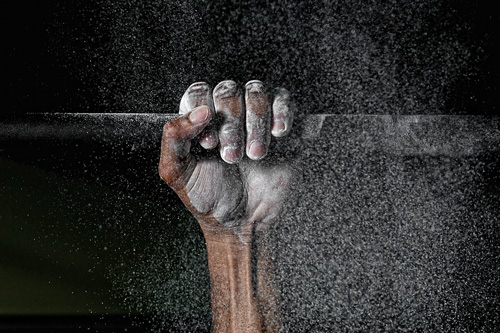 Above: This was probably my favorite from the gym shoot, and while it was fairly easy to make, the athlete (his name was Reeth) who had to do pull up after pull up until I got it just like I wanted it, had it a lot tougher than I did by a long shot. Above: Here’s the production shot (photo by Brad Moore—click for a larger view), and although there are two strobes in the shot (one to my left, as noted in the image, and one behind Reeth, we turned that back one off for this shot after I didn’t like how it looked).

The one strobe we did use is a flash head connected to a Ranger RX, but to make the light punchier, we removed the front diffuser (you can see it hanging from the bottom of the softbox). We did leave the inner diffuser still on the inside of the softbox, so while it wasn’t a bare flash bulb, it was pretty darn close. Above: Here’s why I felt bad for Reeth—he had to do pull ups and then hold himself there while I fired off shot after shot. After I took a few shots and looked at them on my LCD, I felt like Reeth wasn’t doing it exactly right, so I asked him to step aside for a moment, and I jumped up there and did a few reps to show him what I was looking for. I started by just hanging on the bar, and then I looked at Reeth and said, “Watch….and learn,” and then I….then I…. (ah heck, even I can’t keep this up this charade with a straight face). Hey, I had ya there for a minute though, right? No? No? Rats!

Camera Settings
The shot was taken with a Nikon D3s at f/9 at 1/80 of a second. The shutter speed isn’t very fast—what froze the powder was the flash—-I just had to time my shot to when his hand hit the bar, which was much easier than actually being the guy on the bar. My ISO is 200, and since I was using strobes, I was in Manual mode. I shot this with a Nikon 70-200mm f/2.8 lens (seen above) out at 200mm.

Post Processing
I wish I had an exciting story about the post processing, but sadly I don’t. In Camera Raw (well, Lightroom’s Develop Module) I added some contrast (using the Tone Curve) and I added quite a bit of Clarity as well. Then I opened the image in Photoshop and sharpened it quite a bit, using the Unsharp Mask with these settings: Amount 100, Radius 1.5, Threshold 0. This type of shot, where every detail can be really crisp, can really handle a lot of sharpening, so I wasn’t shy about pouring it on. That’s pretty much it. Above: Here’s another shot of Mo (the stair runner from yesterday)—suspending himself from two rings. I went for a really dark dramatic look, because if I didn’t you’d see those darn wooden stairs behind him, and all that other distracting stuff. Above: Here’s the production photo (by Brad Moore) and you can see where I positioned the lights—-on either side of Mo, facing each other diagonally. Once Mo pulled himself up on the rings, they would start to rotate, so once he was facing that strobe without a softbox (just a reflector and a spot grid), I would take the shot, and after a few tries I got the shot you just saw previously.

Camera Settings
I started by underexposing the ambient room light by a few stops so it was really dark, then I would light Mo with just the flash. Again, I got lucky that I got shots of him from different angles without me moving my position as Mo slowly rotated on the rings. Of course, since he was rotating, each frame looked different, both from a lighting perspective and a posing one as well. Some looked good (like the one above) and some stunk, but hey—I only needed one good one, right?

Same lighting and camera set-up. Same f/stop, ISO, and all, but the shutter speed was 1/125 of a second. Why the shutter speed change? My finger probably accidentally hit the control dial on the camera at one point or another.

Keeping it Simple Rocks
I hate to say—I loved having such a simple and portable rig for this gym shoot. Just two very small battery packs (an Elinchrom Ranger RX, and a Ranger Quadra), with just two small flash heads total. We used just one small softbox and a reflector and a Grid—that’s all we used for the entire shoot, and that’s why I was able to get 8 or 9 different looks done, in different parts of the gym, with different people, in just a few short hours.

I hope to post a few more images from the shoot, and some behind-the-scenes production shots as well for you all on Friday. In the meantime, don’t miss Guest Blog Wednesday, and Pimpy Thursday here, and then I’ll see you on Friday.