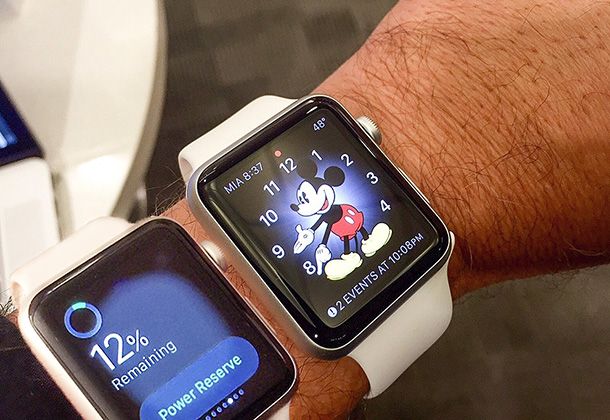 I can’t believe it has come to this, after not even two full weeks, but I either have to dump my Apple watch and go back to my Fossil watch, or I’m literally going to have to buy a 2nd Apple watch because the battery life issue is ruining the entire Apple Watch experience for me.

By having a 2nd watch, I could keep one on the charger, and then each day or so swap the watches, so one would always be charged.

I am not kidding.

How did it come to this?
It hit me this morning, when I woke up and my watch was just about dead. I put it on the charger for a couple of hours and went about my morning, but I noticed that during that two hour block I looked at my empty wrist about 5 times. The fifth time, I really needed to know what time it was, and my iPhone was charging on the other side of the house, so I had to find my iPad just to know what time it was.

A couple of days ago, it was when it went dead at work because I had forgotten to charge it and my charging cable was back at home. A few days before that it was when I went to look at it after waking in the middle of the night but it was dead (I really like knowing the time if I wake up…do I have 15 minutes left to sleep or three hours? I even made a special Apple Watch clock face just for when I go to sleep).

These are all my fault for not monitoring the battery life of my Apple watch closely enough, but I don’t want to have to baby sit the battery on something I’ve never given a second thought to in my entire life. Watch batteries had been something I had to replace every four years, but now I’m worrying about my watch battery every single day.

I know it sounds like a “1st world problem” but I’m already worrying about my iPhone 6’s battery charge (so much so that I’m now carrying a Mophie), and my iPad, and my MacBook Pro’s battery, and I needed another thing to worry about charging like I needed a hole in my head. I’m sure over time I could condition myself to monitor the watch battery status more closely, but the problem is…I don’t want to. This watch is supposed to make my life easier — not give me something new to worry about charging each day.

Besides telling time, the Apple Watch really does just one main thing…
It keeps me from having to dig my iPhone out of my pocket. That’s really its main advantage, and that’s great, but I’ve just replaced one minor inconvenience (pulling my iPhone out of my pocket), with a bigger inconvenience (losing the use of my Apple Watch for two hours at a time every day or so).

Aren’t there other options?
Sure. I could buy a clock for my nightstand, and that way I could charge my Apple Watch all night every night. I just don’t want to do that. I want a wrist watch like I’ve always had. I could buy another $40 charging cable and keep it at work, so I’d have one at home and one at work, so the whole “battery ran out at work thing” wouldn’t happen again, but then I’d have to take off my watch at work for a couple of hours each day. I don’t want to do that either. There are probably other compromises and workarounds, and I hate to say it but the one that makes the most sense is:

…to buy a second Apple watch.

That way, one of the two would always be charged. When I wake up in the morning each day (or before I go to bed each night), I would just take the fully changed one off the charger; put it on my wrist, and put the other one on the charger to get fully charged. It’s too perfect. Except of course, for the price.

I already bought the cheapest one they make — the $399 sport version. I wanted the Stainless Steel version for $700, but I just couldn’t mentally spend that much on a watch (I never have — that kind of money is reserved for guitars). ;-). So, I couldn’t pull the trigger on the $700 Stainless Steel model, and today I’m doubly glad I didn’t.

So, if I bought a 2nd Apple Sport Watch, I’d be at around $800, but then I’d have to order the black sport band separately (I’m still waiting on the original black sport band I ordered on pre-order day), and that was another $50, so a 2nd one would make a total of $100, which would bring my total Apple Watch investment (for two of the cheapest ones they make, but with black sport bands) to…

That’s a lot just to make my one Apple Watch not stress me out.

As for the rest of the watch…
I’m perfectly happy with all the rest of it. I love the screen. It’s slickly designed overall. The apps are pretty clever. It’s well-thought out and solid, and it’s fun (and fun is worth a lot to me), but after using it for about two weeks, I realize what I use it the most for is…a watch, and I don’t need a watch that requires me to baby sit the battery or buy a second one to make up for the really bad battery life.

That’s why I’m dumping my Apple watch
So, today I’m going back to my simple $85 Fossil watch (seen below), and the next time I’ll have to worry about the battery is probably sometime in 2019.