It’s strange how life comes full circle when you least expect it. I was born and raised in South Florida into a family with a long history of fishing, surfing and diving. My deep respect for the ocean and the life that inhabits the majestic waters came from my father, who also spent his formative years enjoying Florida beaches. Little did I know my two passions, the ocean and photography, would collide. Surfing kept me out of trouble in my teens, which eventually led to a 10-year career as a professional surfer. When reality set in and I realized I needed to get a “real” job, I knew the cubicle life wasn’t for me. Photography had always been a hobby, but when I focused on making my hobby a career, the stars aligned and doors opened that I never dreamed possible. By my mid-20s, I had earned positions shooting sports photography with the Sun Sentinel, Getty and Reuters. Some of it had to do with talent, but most of it had to do with luck. I shot a handful of Superbowls, Stanley Cups, NBA Finals and MLB World Series. During this time, I fell in love with the science of lighting and found a talent for shooting portraits of athletes. There is nothing in the world that comes close to capturing a thought, feeling or personality when the light hits the subject just right. It’s all about chasing moments… I bought my first Ikelite underwater housing for a side project I wanted to do while spending quality time with my dad fishing and diving. I wanted to find out if I could capture the same type moments with fish, rather than people. My first underwater portrait was a mahi-mahi about 30 miles off of Fort Lauderdale. When I got home and viewed the images from that day, I was hooked. 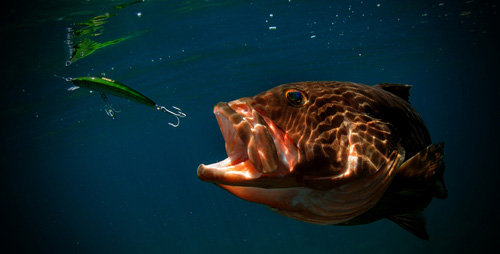 It took time to perfect my technique, but I quickly learned that I only had a split second to get the right shot. There was never room for hesitation. Capturing the distinct details of an individual fish quickly became an obsession. Each fish has unique differences. These differences set them apart from the rest of the school. It’s not always easy and there have been many fishing trips when I came home with nothing. It can be extremely difficult to get a shot because I have to get within two to three feet of the fish. The fish also have to be close enough to the surface to get enough light to capture the brilliance of each fish’s coloring. Although I don’t have fear while I am taking the portraits, I look back at times and wonder where I found my courage. On one outing, I was even able to jump in the water with two big eye threshers. One measured 14 feet and the other one measured 16 feet. There have been a few bites and a couple close encounters, but I am thankful that fish and sharks are usually more curious than aggressive.

The key to taking great photos is finding the adventure in every moment. Whether you are shooting sports, weddings or fish, there is always an adventure waiting and a story to be told.